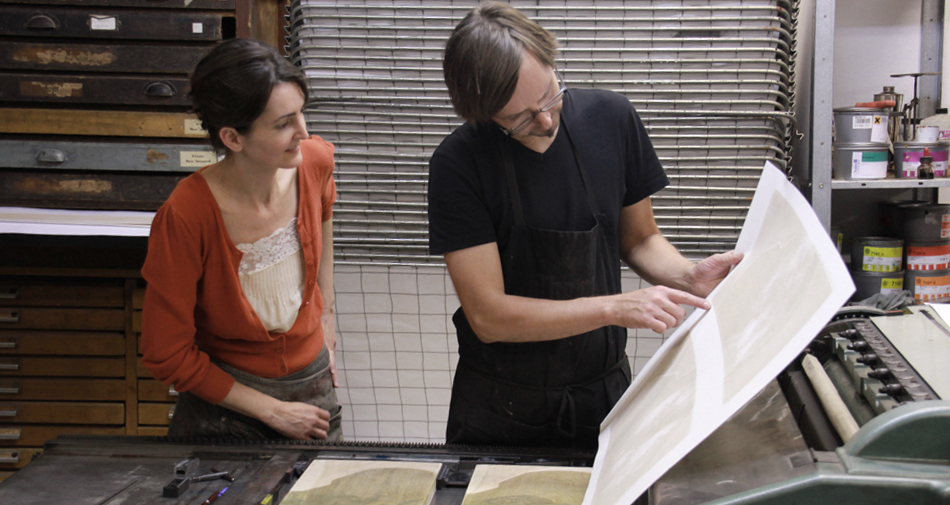 The collaboration with the community of printmakers of the art center Spinnerei in Leipzig had began in 2012 with a woodcarving series from Maribel Mas printed at the workshop of Thomas Siemon, the editor of carpe plumbum and printer of Lubok artist books.

In 2013 this woodcarving series in blocks of cherry wood titled “Sakura”, were finished combining them with photopolymer plates. These edition and the woodcarvings of the series “Time Lines” were done during the “Hochdruck Grafik Symposium” organized by Thomas Siemon, who invited a group of five artists to his workshop between july and august 2013. The prints were shown in the Druckkunst Museum in Leipzg as part of the exhibition “IMPRESS”.
The prints were also shown in Tapettenwerk in 2013, 2014 and 2015 exhibitions organized by BBK Leipzig.

During july 2013, the workshop of Vlado and Maria Ondrej Atelier für Radierung, invited a group of 12 artists to their project “Cliché Verre”. They describe the experience as a “rediscovery of Cliché Verre, a long forgotten technique that we would like to contextualize within our contemporary understanding of time. It is not our purpose to revive an old technique, but to reinvent it and to establish a link to contemporary artistic contents and discussions”.

The works were exhibited previously in: