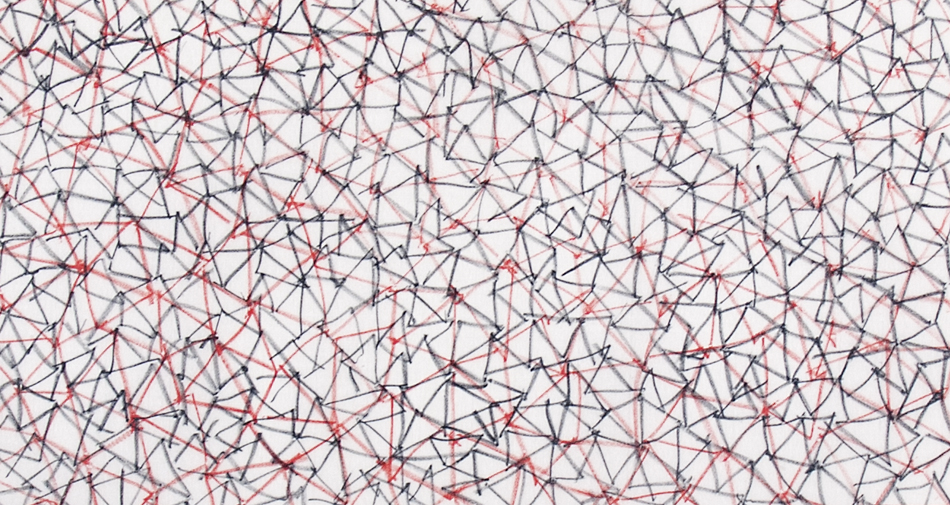 During the last ten years of activity in Barcelona, the Workshop Taller Esquina had collaborated with many local and international artists to develop their own printmaking projects, mainly in stone lithography.

One of the most interesting editions was a series of stone lithographs by Joaquim Chancho, who came to the workshop as a guest and draw directly in the stones. His three initial sketches were transformed into a series of seven lithographs on stone titled Piedras. Printed on ganpi paper, in shades or red and black they combine quick pencil strokes with brush lines creating light structures and resounding forms.

The editions were printed at Taller Esquina in Barcelona by Maribel Mas, in a french style stone press, using japanese ganpi hand made papers. The works were presented in a case, elaborated by Ángels Arroyo and exhibited in the book fair Arts Libris in Barcelona in 2013.
The experience was so positive, that Joaquim Chancho return to the workshop again in 2014 to make a new lithography series. In this opportunity the drawings were done in 100 x 80 cm aluminum plates that were previously prepared with a structure of relief  lines. The making process of both series of lithographs were recorded in a video by Nelo Olmos.

In 2014, the editions were exhibited in the Museum Abadía de Montserrat and between april and september 2015 in the gallery Círculo del Arte in Barcelona, in the Grafik Barcelona-Leipzig project.
The series of stone lithographs from Joaquim Chancho are contained on this Piedras PDF file
The works are presented in the Elan d’Arts web:
https://www.elandarts.com/artistes/chancho-joaquim/

Another important guests in the workshop was Arnal Ballester, who worked in a series of stone lithographs title Cuadernos, printed on ganpi paper. The drawings are related to the artists notebooks, full of sketches with his personal stile and sense of humor. The works were also presented in Ars Libris book fair and in the gallery Círculo del Arte in Barcelona, in the Grafik Barcelona-Leipzig project.
The series of stone lithographs from Arnal Ballester are contained on this Cuadernos PDF file
The works are also presented in the Elan d’Arts web:
https://www.elandarts.com/artistes/ballester-arnal/

For further information about the editions please write to: info@maribelmas.com