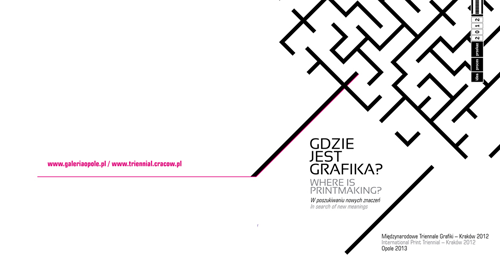 Where is printmaking? In search of new meanings

In the context of the 20th Krakow International Print Triennial

The curator of the exhibition at Opole Contemporary Art Gallery, Aleksandra Janik, had proposed a reflexion to the selected printmakers from the 20th Krakow International Print Triennial about the sense of printmaking in our digital era, with traditional techniques that still can be useful in a contemporary artistic language.

The sentence from Janik text: “results that which cannot be provided by other media”, could be a starting point of various reflections, for example, the fact that the materials and techniques can be forced to their limit in order to obtain results that are not natural or expected from them. It depends on the intention of each artist, but usually when techniques are forced, the result transmit some uncomfortable tensions, that could be useful, or not, in the content of each work.

During the last years working with stones and aluminum plates I had repeatedly felt attracted for doing some random procedures to scape of a controlled way of working, and finding in the accident an invaluable resource of possibilities. Vibration series, for example, was a monotype series made on a combination of digital print on ganpi japanese paper and stone lithography that was based on  ¨incorporated¨ accidents. The base image comes from another stone lithography that were stretched to a huge horizontal scale for mistake, 1000 x 100% in Photoshop, so each small point of the lithography became a short line, that in the following steps was forced again, and again 1000 x 100% and the initial points grow to infinite lines. After printing these black and white images I draw on a stone some lines with a sharp knife instead of pencil or ink, and while printing them in red, allowed the stone to dry, so the inks sticked out of place, making uncontrollable drawings. I cannot answer the question: why this necessity of doing everything technically wrong? The result was just a very calm and systematic series, and some people observe in them a musical partite or a seismograph lecture…

For Cycles and Structure lithography series, I had used thin aluminum plates, that had been marked with sharp tools in the back, to construct a strong structure of scarves, that came out during the drawing with lithographic bars on the front. That is not also an orthodox way of working on aluminum plates, but it was the simplest resource to obtain this base for the drawing, due the fragility and weakness of the matrix. Certainly, I think that it could´t be done in another printing technique so directly, that also had allowed me to find an interesting cross of directions between the structure from the matrix back and the drawing on the front, specially when they had met in nearly opposite directions.